Mini-game organized by the Crédit Agricole of Franche-Comté, "MISSION REFLEX". By traversing the roads of Franche-Comté, play on your computer as well as on your smartphone to gain driving courses or movie tickets.

The game was made ??with Pixi.js (webGL or canvas) to be compatible with smartphone and tablet. Integration use Responsive design to adapts to the available space on the screen for optimal viewing.

The player must react quickly enough that the car does not collide with an obstacle in three different environments: dry city, rain in campaign and snow in the forest.

Player informations are recorded through Ajax in a database that will let randomly pick up winners at the end of the game. 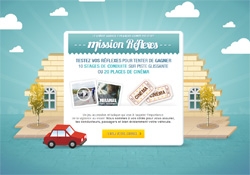